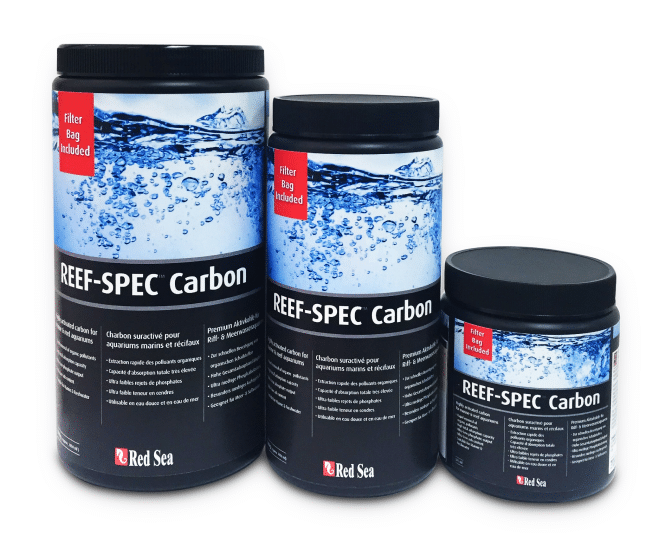 Red Sea REEF-SPEC™ Carbon is the ultimate choice for marine & reef aquariums due to its unique technical characteristics.

REEF-SPEC Carbon has extremely low phosphate leaching and minimal ash content while also not affecting the pH of aquarium water.

Red Sea REEF-SPEC Carbon needs replacing less frequently than carbons that are not reef-specific or are of a lower quality and represents an effective, cost-efficient solution for providing the very best water quality in marine & reef aquariums. 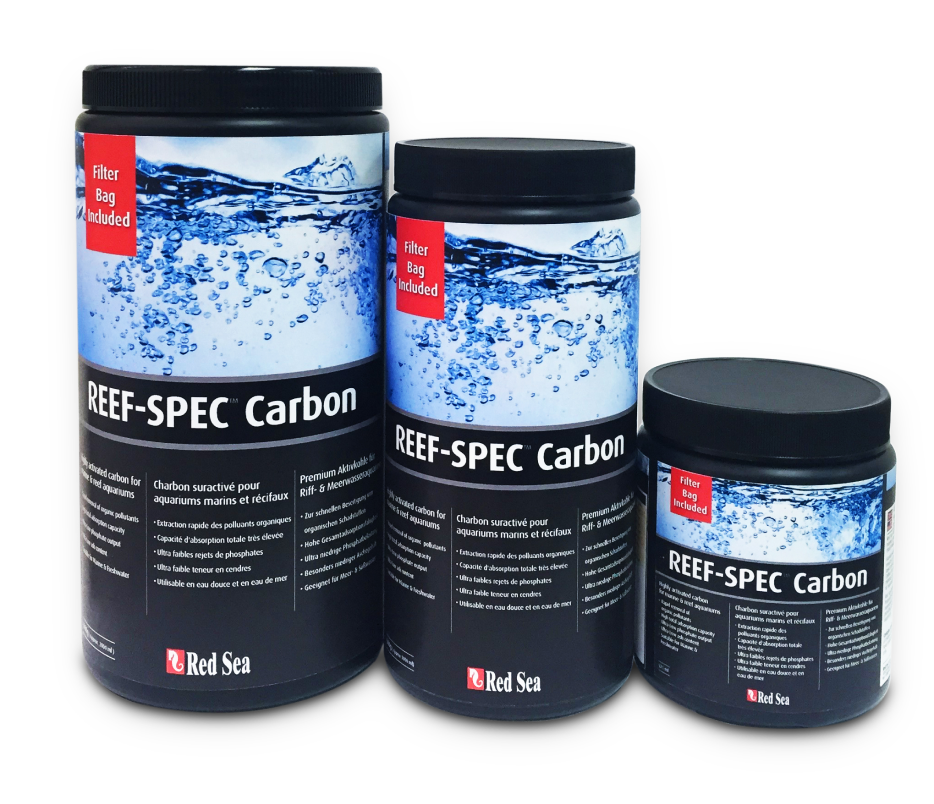 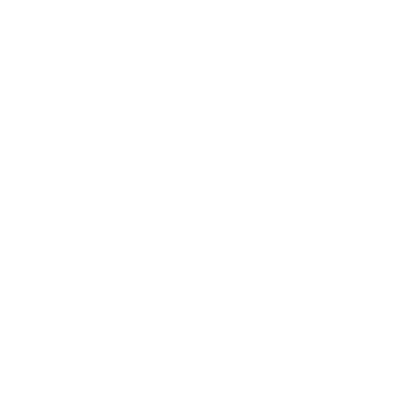 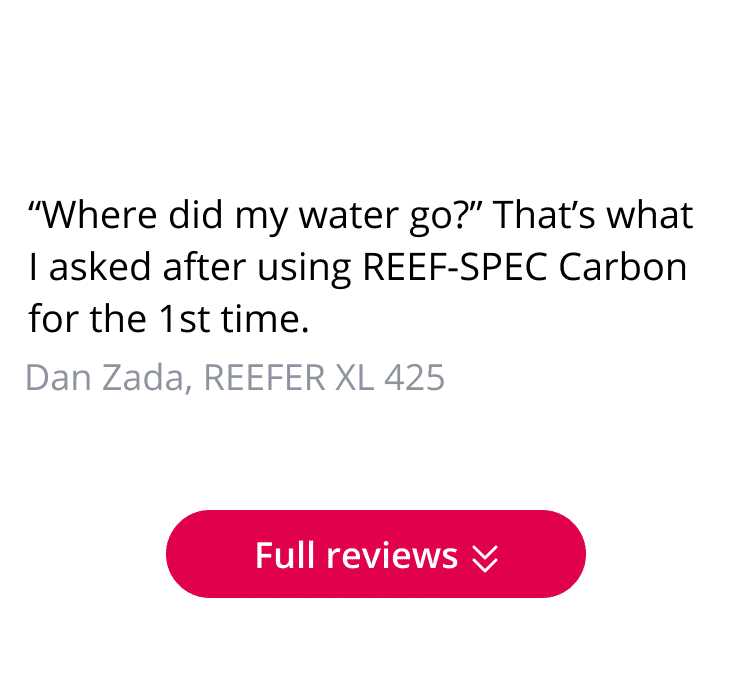 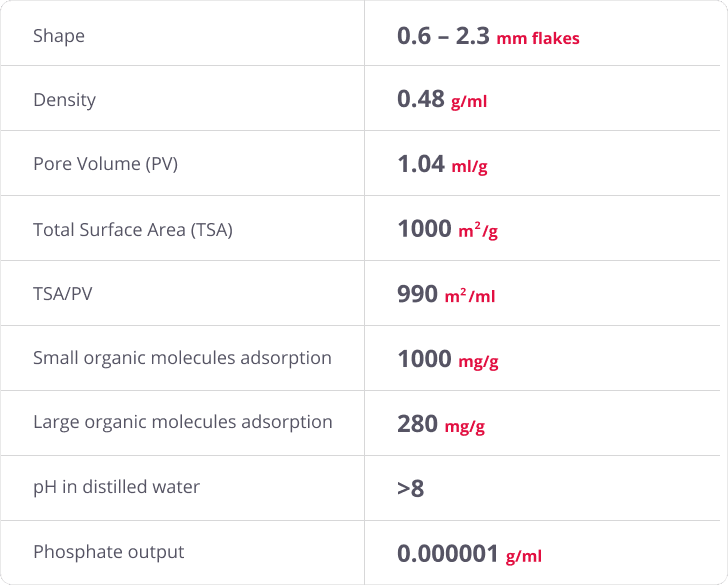 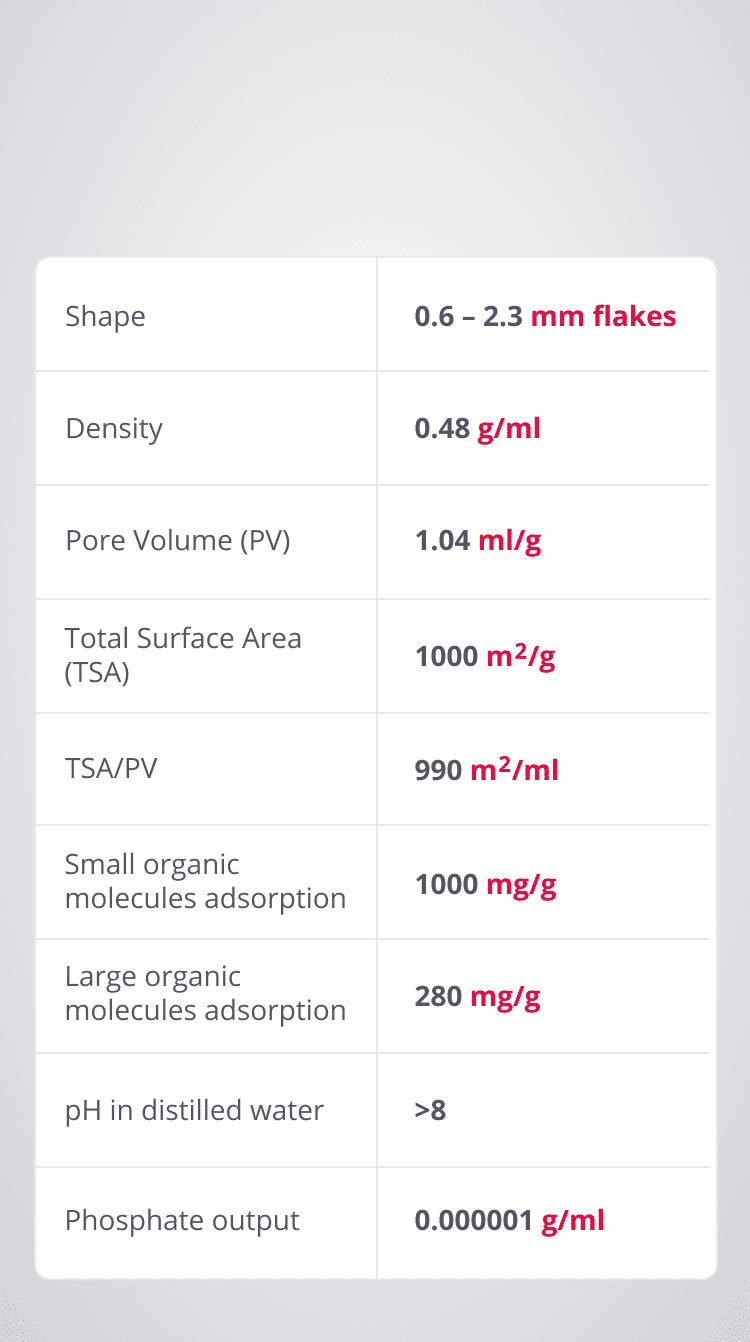 The role of activated Carbon in the reef aquarium

Why do we need to use Carbon in a reef aquarium?

There are organic pollutants that can only be removed from reef aquarium water by active Carbon. 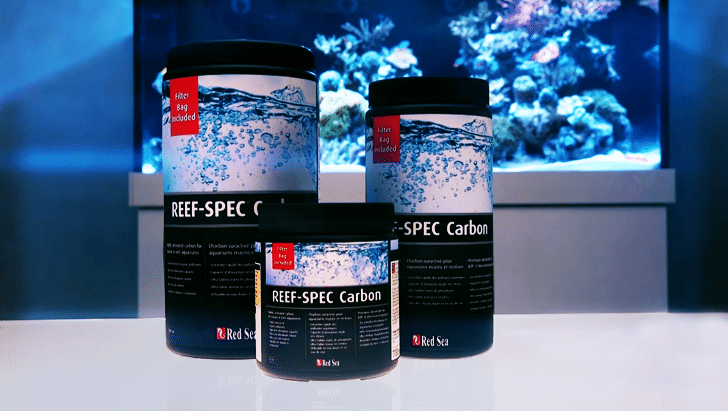 If allowed to decompose the organics will fuel the activity of many unwanted microorganisms in the aquarium, increasing the total oxygen demand (BOD, COD) which will cause a reduction in Redox potential, as well as causing excessive production of CO2 by bacterial respiration, which will reduce pH.

Furthermore, there will be an increase in nitrogenous and phosphorus compounds, encouraging growth of nuisance bacteria and eventually of nuisance algae. The accumulating organics also has a significant effect on light penetration, especially in the blue and near UV spectrum that stimulates coral growth.

Stripping out the organics from the water is therefore crucial for the success of the aquarium. Using strong protein skimming, fine mechanical filtration and healthy biological filtration (nitrification and de-nitrification) will treat the large organic particles and the end products of the organic decomposition processes. However, there are many small organic particles that can only be treated by very fine mechanical micro-filtration using activated Carbon.

How does activated Carbon filter water?

Scientifically speaking, Carbon removes the organics from water by a physical process called adsorption. Within a reef aquarium, the submicroscopic pores of activated Carbon is the final stage of the mechanical filtration process, adsorbing the organic molecules that are too small to be removed by even the finest mechanical filters or physically removed from the water by protein skimming.

What is activated Carbon?

Activated Carbon is an extremely porous material with a sponge like structure but with a very large internal surface area relative to its physical size. It is produced from many organic materials that have a high Carbon content such as coconuts shells, nutshells, lignite, bituminous coal or anthracite. The Carbon-based material is “activated” through physical modification and thermal decomposition in a furnace, under a controlled atmosphere and temperature.

The activation process significantly increases the surface area per unit volume of a fine network of submicroscopic pores which is what gives activated Carbon its ability to act as a filter material. The specific source of the Carbon and the specific activation process determines the physical characteristics of the finished product. There are many different grades of activated Carbon, and therefore they must be selected specifically for each and every application.

What makes a specific Carbon ideal for reef aquariums usage?

There are a number of internationally accepted tests for evaluating and comparing activated Carbon. However, the most significant parameters for selecting a Carbon for reef aquariums are the Iodine Number and Methylene Blue Number. These two parameters measure the ability of the Carbon to adsorb all of the organic waste from a reef aquarium that is not removed by the mechanical filtration and protein skimming. The higher the number the more organics will be removed from the aquarium per gram of active Carbon used. Both of these numbers are about as important as each other and should always be considered together when evaluating test data.

Some manufacturers quote a Molasses Number, however the molecules in the molasses size range are typically removed by protein skimming, and therefore this number is irrelevant when evaluating the suitability of activated Carbon for reef aquariums.

In the past, Carbons have been known to leach phosphate into the water, which is undesirable for a reef aquarium, and therefore the lowest levels of Leachable Phosphate are considered better. In reality, as long as the leachable phosphate is below a basic threshold level, any differences below that level is not measurable in reef aquariums and is therefore irrelevant.

The cleanliness or dustiness of the product is also a consideration and is measured as the Ash Level. The lower the better as higher levels indicate a larger quantity of particles will be released to the water and a lower actual mass of Carbon left to do the filtration. Ash levels are often quoted by manufacturers however it is easiest visualized by viewing the turbidity on adding the Carbon to water.

In addition to these important indicators, the overall efficiency of the activated Carbon will be effected by its physical parameters, such as Product Density, TSA, Pore Volume and Mesh Size.

Activated Carbon produced from lignite and anthracite are not recommended for reef aquariums due to an excessive amount of fine powder released to the water (which may lead to lateral line necrosis “HLLE disease” in some fish). Coconut shell or bituminous coal are the preferred sources.

The adsorption activity of the Carbon media relies on a good Carbon/water contact, and therefore moderately active water flow will increase the efficiency.

Strong water flow will reduce the contact time and interfere with the adhesion process of the organic molecules to the Carbon.

Strong water flow may also cause the granules to grind against each other, releasing Carbon material to water.

The recommended dosage of Red Sea’s REEF-SPEC Carbon is approximately 50 gr (100 ml) per 200 L (50 gallons) for a period of 1-2 months for a moderately stocked reef aquarium.

The recommended dosage of Red Sea’s REEF-SPEC Carbon to adsorb medication residuals is approximately 100 gr (200 ml) per 200 L (50 gallons) for a period of a week.

The recommended dosage of Red Sea’s REEF-SPEC Carbon to remove residual ozone is 50 gr per 50mg/hr of ozone injection. The carbon should be placed at the ozone reactor/ protein skimmer outlet. Carbon should be replaced once it has reached approximately 50% of its original volume. 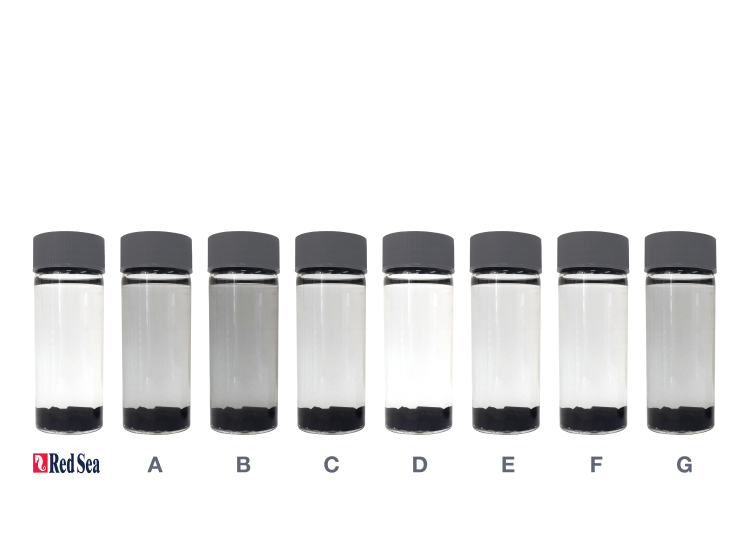 Standard testing done to estimate the adsorption capacity of small molecules, in the range of 10 Å to 15 Å. Recommended levels for reef aquariums are above 850 mg/g but the higher the number the better.

Standard testing done to estimate the adsorption capacity of medium size molecules in the range of 15 Å to 40 Å. Recommended levels for reef aquariums are above 250 mg/g but the higher the number the better.

Non-standard testing done to estimate the adsorption capacity of large molecules above 40 Å. There is no recommended level for reef aquariums these molecules are removed by protein skimming.

A measure of the non-Carbon content of the activated Carbon. This is normally a dust that will be released from the Carbon to the water. The less Ash the better.

A measure of the amount of residual orthophosphates PO4 that may leach from the Carbon to the aquarium. The less phosphate the better and for reef aquariums should be below 10 mg/kg. Highest quality Carbons will be below 2 mg/kg.

Density of the Carbon at maximum packing efficiency, reported in g/ml.

Amount of pore surface available for adsorption for a given mass of Carbon, measured using techniques such as BET nitrogen adsorption; reported in units of m²/g.  Recommended levels are above 800 m²/g.

The amount of macro, meso and micro pores. The ratio between TSA to pore volume estimate the active surface area in m2/ml. 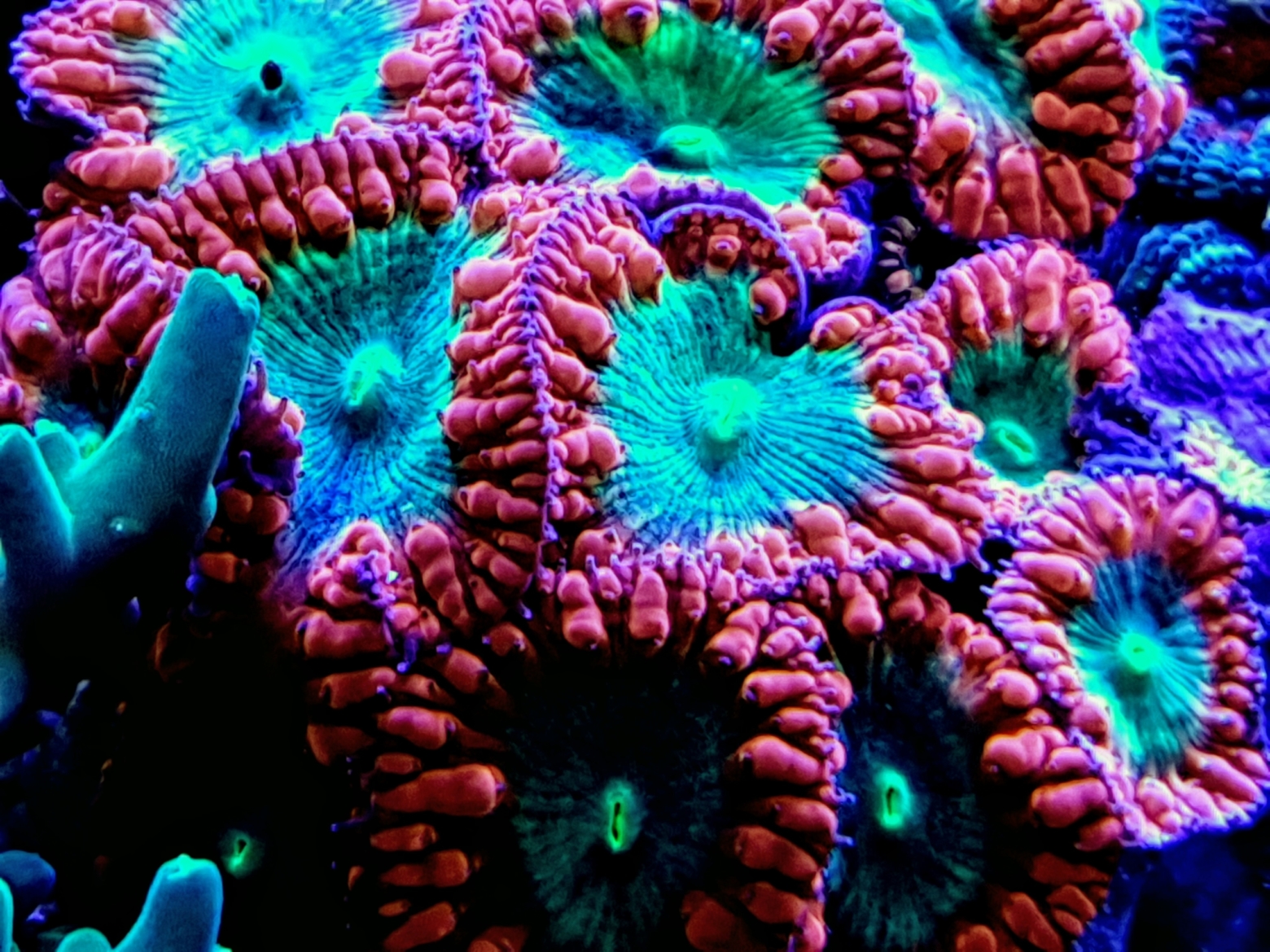 “Where did my water go?” That’s what I asked after using REEF-SPEC Carbon for the 1st time.

I love how it cleaned my water and made all the corals stand out. Cleaner water meant light can get better penetration to the darker parts of the aquarium and my corals are thriving. I feel it even helped with the algae as I clean the front glass less. It costs less and lasts longer than what I used to use so it’s a win-win. 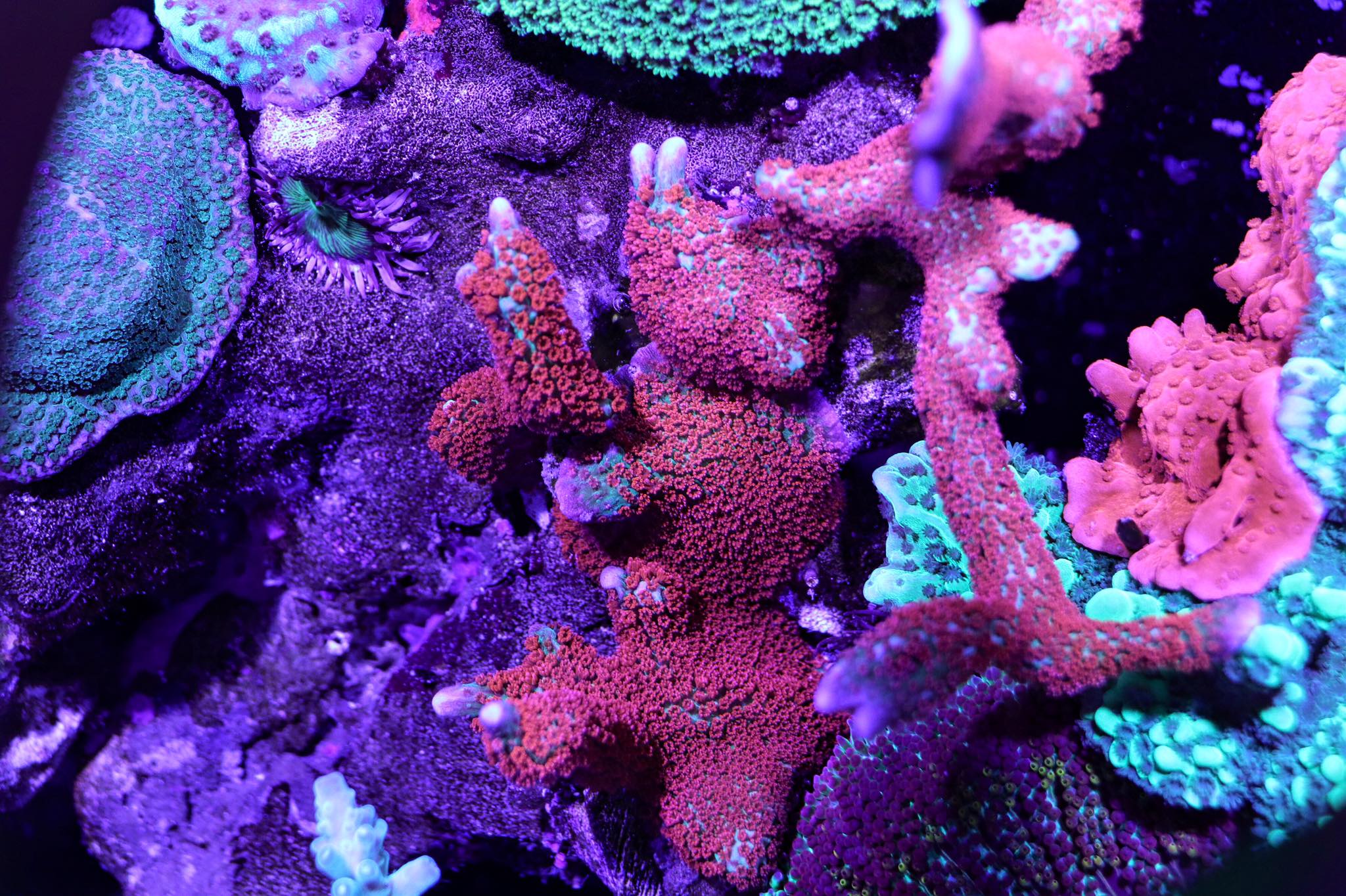 It’s the best carbon I used.

My fish look like they are floating in air. You use very little amount in the filter bag give it a quick rinse and that’s it.

I replace it regularly and it keeps my water sparkling clean. One thing I like about it is that it’s much cleaner than other carbons with minimal washing needed and no dust waste particles getting caught in my skimmer after I place it in my system. 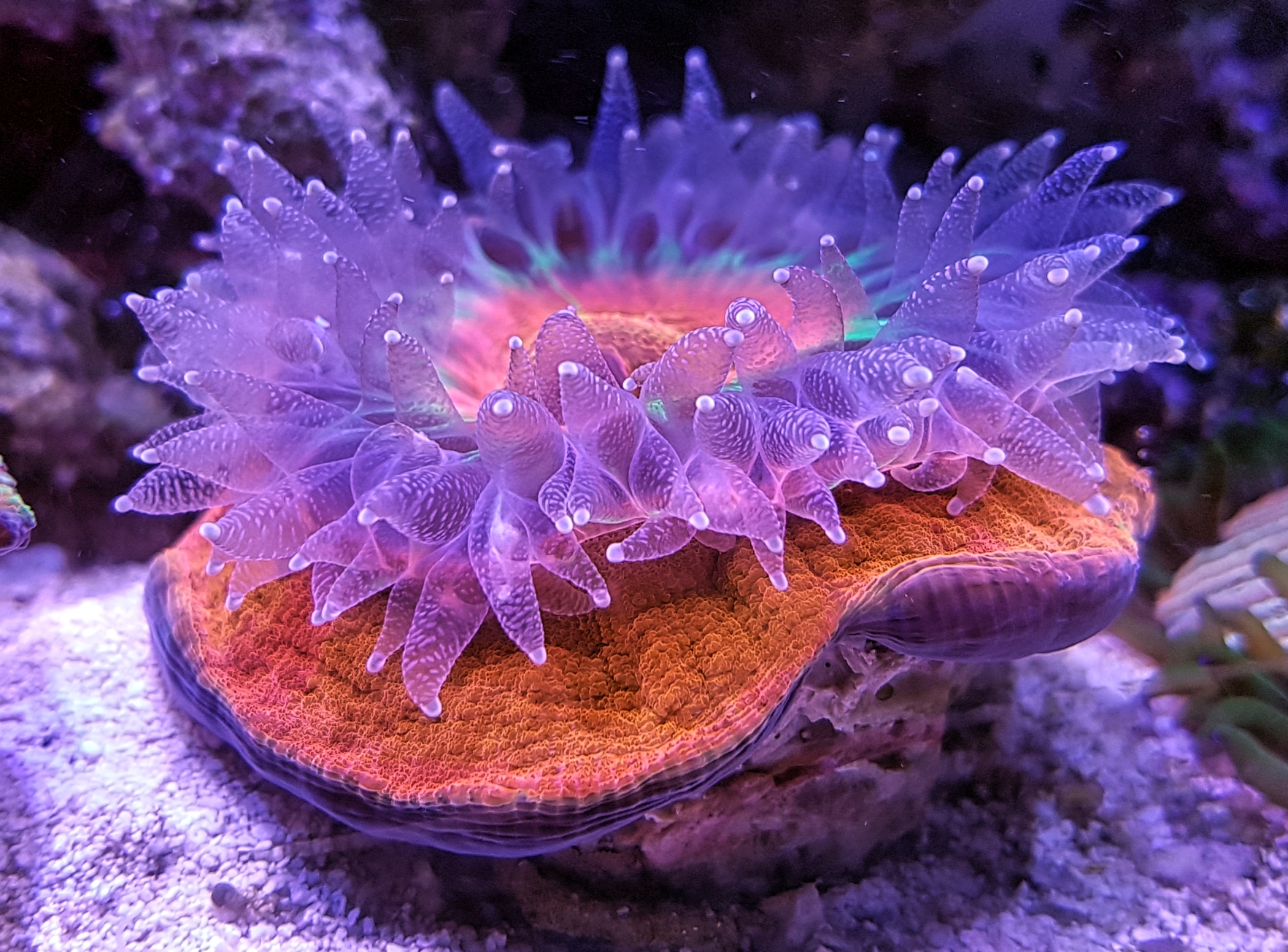 It’s not just carbon- it’s the carbon I choose. I have been using it for the past 2 years. Initially I thought “it’s just carbon” but after I tried it I was very impressed! It works very quickly and polishes the water really well. On top of giving excellent results, it has a great removal capacity as you need a relatively small amount to get the job done. Its much cleaner to work with than all the other carbon I have tried. The filter bag is also an added bonus. Over all I gave it a chance and glad I did, it’s here to stay. 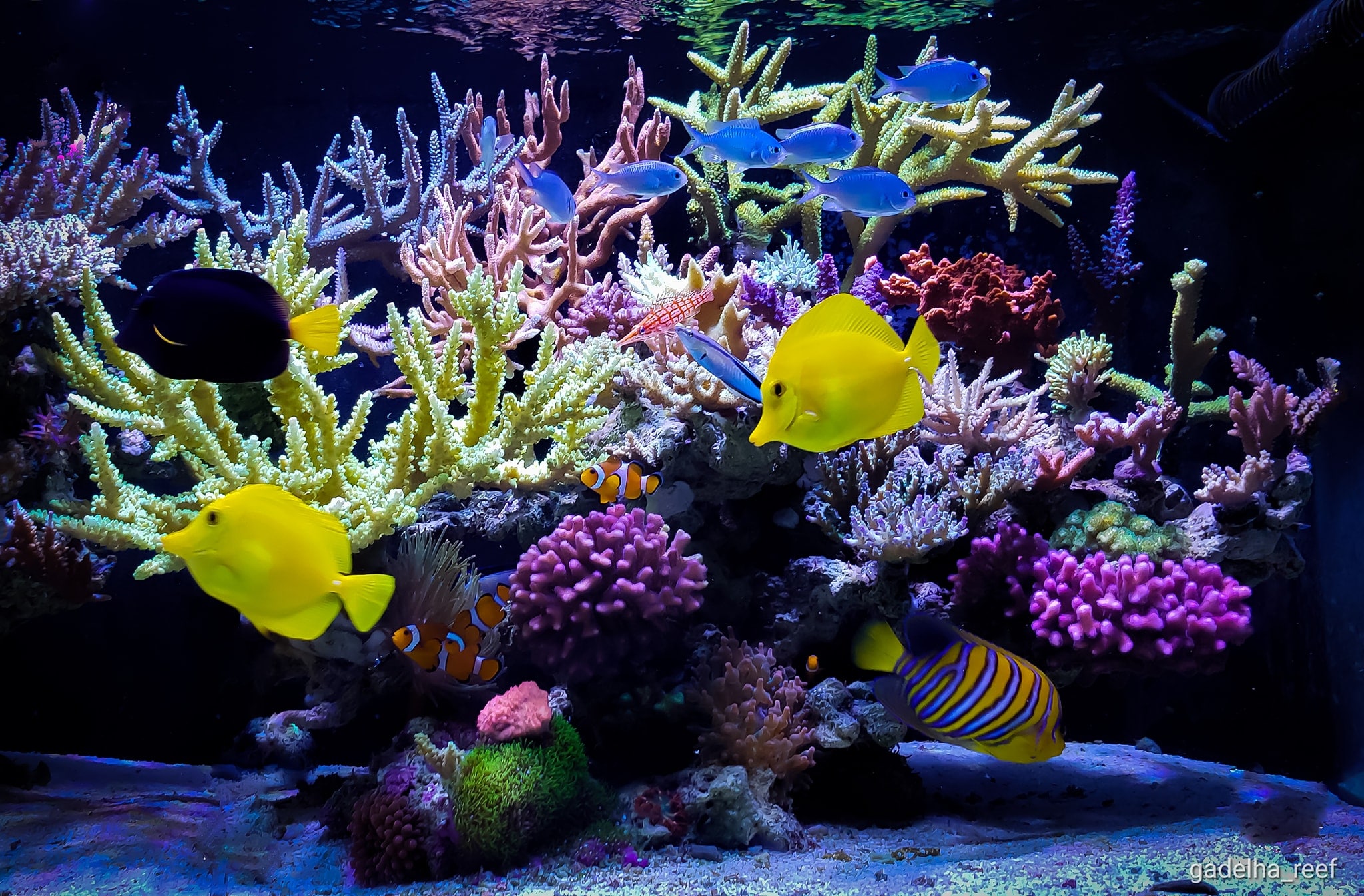 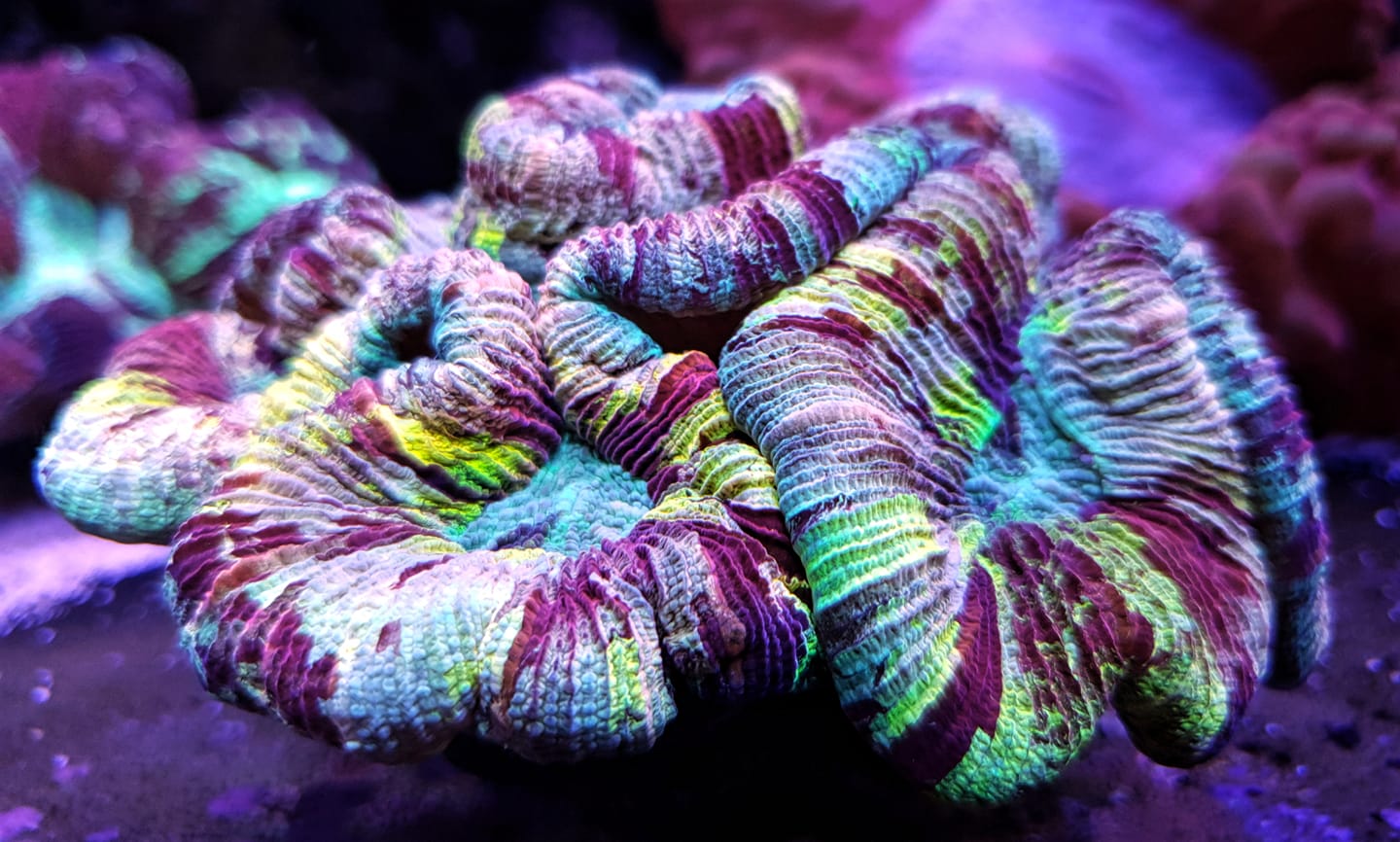 Having a media bag included is brilliant.

I keep it in the system 24/7 and my fish and corals are loving it- crystal clear water, cost-effective, and easy to wash. 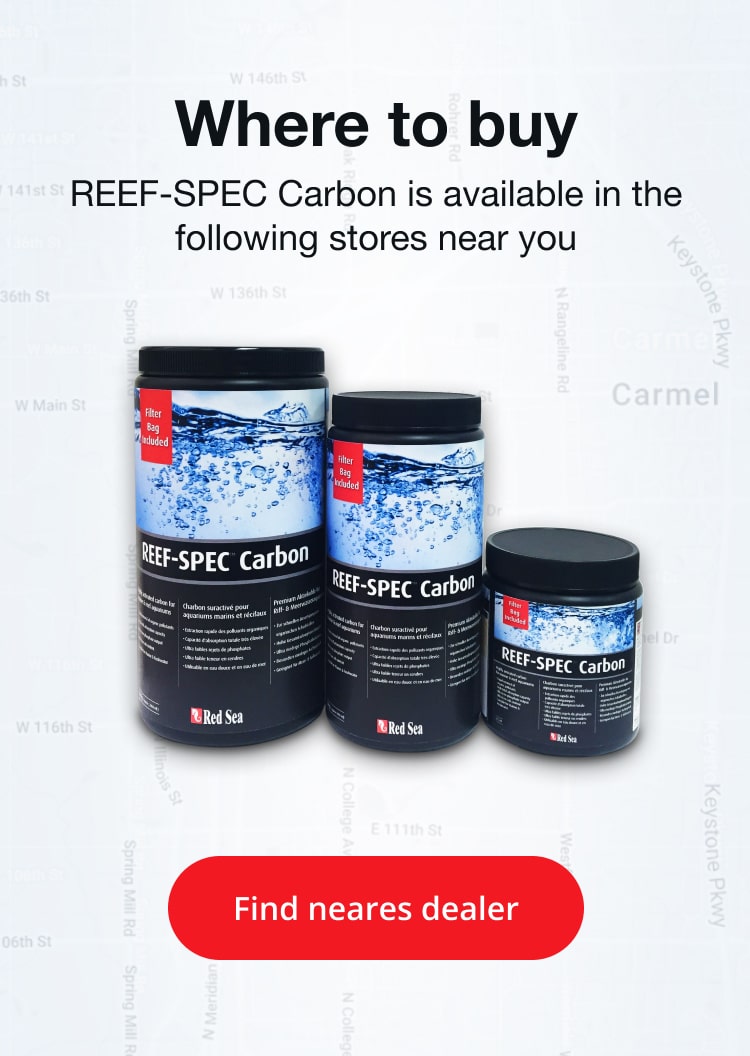